Paraphrases: Romantic Music for 6 to 28 Horns

Music for Horn Ensemble arranged and conducted by Herman Jeurissen

“…This CD is top quality and highly recommended… All of the arrangements are expertly crafted by Herman Jeurissen… The depth, range, dynamics, and colors on this recording are truly remarkable. For the listener who might find horn ensemble music monotonous, this recording will certainly change that opinion. Congratulations to Professor Jeurissen and his incredible cadre of current and former students.” (The Horn Call. February 2014)

The new CD ‘Paraphrases’ is for sale at www.rimskys-horns.com, www.fehr-frenchhorns.com and http://www.hoornshop.com, or you can send an email with your order to info@capricorno.nl (€ 12,50 ex. shipping). 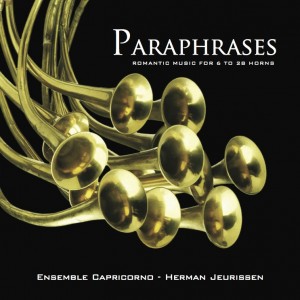 The horn plays a crucial role in the Romantic orchestra. Robert Schumann praised the instrument as being the ‘soul of the orchestra’. Even in his piano works Schumann regularly distilled the sound of hunting horns: the Hunting Song (Jagdlied) from his cycle Forest Scenes (Waldszenen) op. 82 sounds like a piano arrangement of a virtuosic horn fanfare. The great Romantic composers however, hardly wrote any original music for horn ensemble. Horn ensembles in those times performed mostly music for the hunt and choral songs and choruses. A work such as Anton Bruckner’s Angelusläuten (Ringing the Angelus) has always held a permanent place in the repertoire of the Wiener Waldhornverein (The Vienna Horn Society). My arrangements of male choruses by Schubert, Brahms and Bruckner are thus in keeping with this long tradition. Bruckner’s rarely performed a cappella choruses Das Hohe Lied (The High Song, 1876) and Träumen und Wachen (Dreaming and Awakening, 1890) are almost impossible to sing in their original form, and were first performed with harp, brass and string parts added at the last minute with the blessing of the composer.

In this period originality was not considered to be as important as we may assume today. The largest proportion of published music of the time consisted of transcriptions, fantasies, paraphrases and variations on extant pieces. Franz Liszt entranced the 19th century public with his fabulous piano technique. He trans- formed opera arias, orchestral works, (folk)songs and even church music into virtuosic piano works, using the original music only as a starting point. In a number of Liszt’s piano transcriptions we find the unusual instruction ‘quasi Corni’ (in the manner of horns). The Fantasy on Swiss Alphorn melodies Fleurs mélodiques des Alpes (Melodic flowers of the Alps, 1837-38) and the paraphrase on Mendelssohn’s chorus Der Jäger Abschied (The Huntsmen’s Farewell, 1848) seem almost to be predestined to be arranged for horns. However, to paraphrase such acrobatic piano passages into virtuosic horn leaps turns out to be no easy task. It requires not only a great deal of fantasy from the arranger, but also much skill and technique from the players.

Much the same applies to Liszt’s Heroide (1848). This pianistic tour de force is based upon three choruses by Carl Maria von Weber from his cycle Leier und Schwert, Op. 42 (The Lyre and the Sword). Following a paean to the sword and a prayer for protection in war, there follows a frightening depiction of the grizzly demise of the overconfident huntsmen’s regiment, gruesomely routed with horns a-blazing.

Richard Wagner approached Weber’s musical legacy in a completely different way. Wagner honored Weber as the father of German opera and saw himself as Weber’s legitimate musical heir. Weber died prematurely in London in 1826, and Wagner took the initiative to have Weber’s body re-buried in Dresden in 1844. To mark the occasion Wagner wrote a Trauersinfonie (Funeral Symphony) for wind orchestra on themes from Weber’s Euryanthe (1822-3). Following the ‘Ghostly apparition’ passage from the Euryanthe overture, comes the Cavatina Hier dicht am Quell (Here by the Spring). The ‘Verklärung’ (Transfiguration) from the finale of the opera concludes this small homage. Wagner replaces the original tremolos in the viola part with rolls on the field drum, to underscore the funereal character of this occasional composition.

Liszt’s innumerable operatic fantasies inspired me to produce the large scale Concert-paraphrase on Wag- ner’s opera Tannhäuser (1845). The great pilgrims scenes from the opera formed the starting point and finale, with the hunting party from the first Act functioning as an intermezzo. In the opera itself, the horns play a prominent role in the orchestral writing, since not only huntsmen, but also pilgrims traditionally carried a horn along with them on their journey.

Wagner probably first read the Tannhäuser legend in Das Knaben Wunderhorn, which was such a great source of inspiration to so many 19th century composers. Johannes Brahms also delved into the collec- tion for the text to his song Ich schwing mein Horn ins Jammertal (I blow my horn into the vale of tears). The Wunderhorn songs of Gustav Mahler are among his most performed pieces, yet the song Nicht Wie- dersehen! (We shall never see one another again, 1887) remains almost unknown. Mahler came from a Jewish background, and throughout his life was confronted with the degeneration of the ideals of the Romantic. Patriotism and desire for Christian mysticism developed during this period into xenophobia and rampant anti-Semitism. Mahler’s music always expresses a double meaning; the sublime is never far from toppling over into kitsch. Nicht Wiedersehen! could be interpreted in this context to represent a farewell to German Romanticism, a nostalgic valediction for a world that has gone forever. A transcription for horns seems apposite, since the horn for Mahler not only symbolized nature at its purest form, but also the ‘good old days’ of his youth. 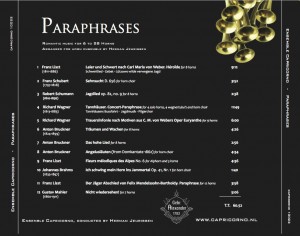